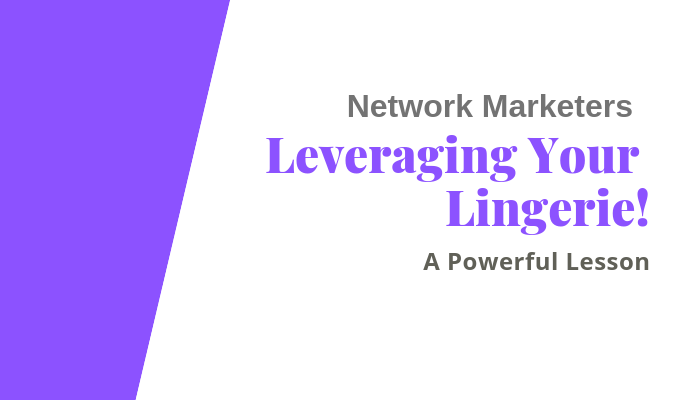 The door was going to open any minute...

I wasn't ready! I was running around like a chicken with my head cut off.

The day flew by. I was behind schedule. And there were still things to be done.

I'd just barely gotten home from the grocery store and got all of the bags unpacked, and the mountain of food off the kitchen counter and put away...

My brain was spinning. It felt like a race against the clock.

What was the next most important thing???!!!!! What could I do in the least amount of time to make the greatest impact?

There was laundry to be put away... those "delicates" that can't be put in the dryer and have to hang to dry...

There was the dishwasher to unload...

I Stopped Dead in My Tracks!

And burst out laughing!

I was doing what I do in my business all the time... but I was applying it to mundane, ordinary household chores and I hadn't even realized it.

I was paying attention to the levers.

What one thing...lever...should I focus on that will have the greatest impact on my business?

Now the goofiest part of this little household chore episode, (that just happened on Friday night) was that it was just my husband who I was expecting home from work at his usual time. And I had it in my head that I was going to get all of this stuff done before he got home.

There was no real urgency, or pressure. It wasn't like we had guests arriving to a messy house! It was just me... being me! LOL!!!

One of the most powerful things I've learned is to pay attention to the levers in your business.

I have the privilege of observing lots and lots of people trying to grow their businesses.

And I can tell you that the vast majority of people don't spend a second thinking about levers!

Instead, they mostly spin their wheels trying to get everything done. And consequently get little or nothing done.

So instead of trying to do everything...

What is the One Thing?

What is the single most important thing you should be focusing on in your business that will bring the greatest results?

WARNING: Serious Offer for ONLY 5 People

I'm opening up just five spots in my Platinum Program.

This program is only for people who have absolutely, positively, without a doubt made a decision that they're going to take their businesses to the six, multiple-six figure and beyond level.

If you're not there yet, or you're there, but struggling and want to go bigger, and you know that having a mentor who will be there with you every step of the way, is the only way you're going to get there...

I want to invite you to book a call directly with me.

This is an intensive year-long, Done-For-You mentoring program. In this program my team and I literally build your business for you.

If you're serious and want to find out more, you can speak directly with me.

P.S. I decided that putting away the lingerie was going to have the biggest impact on cleaning up my house before my husband got home... just in case you were curious! LOL!!

After all... the clean dishes were hidden away in the dishwasher anyway and they weren't in the way. 🙂