He Had The Talk With His Son…Yes THAT Talk. - Gloria MacDonald 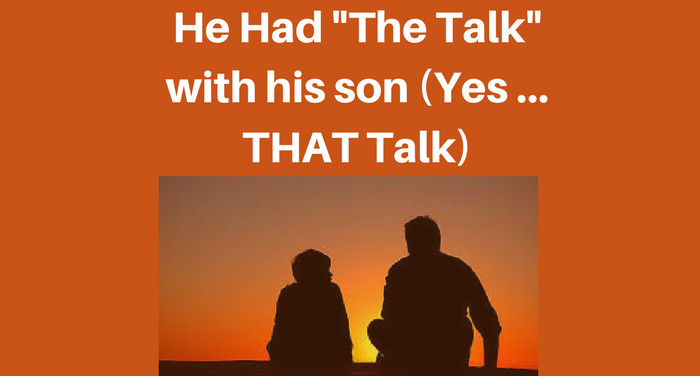 He Had The Talk With His Son…Yes THAT Talk.

Go with me here - this has EVERYTHING to do with your business!

I got this email from one of my mentors, Tyson Zahner. Tyson is a marketing and Network Marketing GENIUS!! He knows how to grab your attention, tell a story, pull you in, and

I don't know if there are many things parents fear more!

If you have children of your own (or if you know anyone who does) ...

you probably know what I'm talking about.

I had sweaty palms, I rehearsed what I would say and of course I was worried about how my 7-year old son would react.

But ultimately it had to be done so I took a few tricks out of my marketing bag ...

Stuff that works just about every time to influence, persuade and establish credibility with others. (see this stuff isn't just beneficial for your business)

Here's what I did.

I started with a story (which also happens to be one of my favorite and most effective ways to start a sales presentation as well).

I basically told him about a time when I was a kid that I was embarrassed on the bus because some of the older boys were using terms that I didn't know.

I acted like I knew what those kids were talking about and I laughed along, but inside I felt really insecure and stupid because I knew those older boys could see right through me.

After that quick story, my son was all ears to hear what I had to say about the birds and the bees.

So what's the marketing lesson for your business here?

The most important one is this ...

I knew my son was going to have absolutely ZERO interest in hearing his dad talk about body parts and stuff that's probably really "gross" in the mind of a 7 year old.

But what he IS incredibly interested in is not looking stupid in front of his friends.

Once I told him that story, he now had a reason to want to listen.

(Not to mention I had built quite a bit of credibility by letting him know I was once a kid with fears and insecurities just like him).

If you want some help understanding your target audience better so you know how to get them interested in what you're selling ...

And if you'd like a system to build a BIG team....the exact same system I use to bring a steady stream of prospects, sales and team members to me EVERYDAY...

You'll want to check this out!