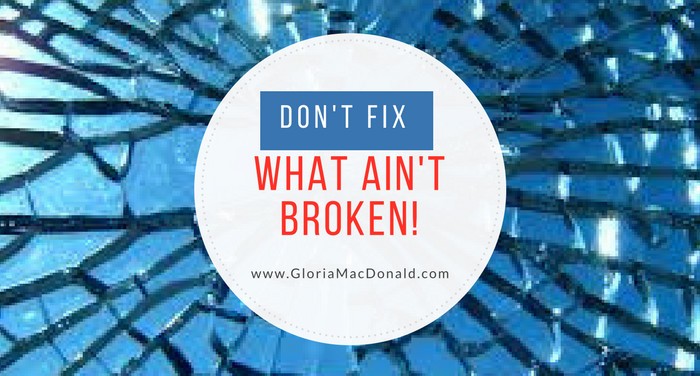 That's what a mentor of mine used to say.

He followed that with...

Now those are words to live by.

So no matter who's giving you the advice...

Your upline, your upline's upline...

Take what works for you and use it.

And don't do what doesn't work for you.

So if what you're doing to build your network marketing business is really working for you...

And know that what works for you, might not work for someone else.

So recently I was reminded of a coaching client I had several years ago.

This woman is quite high up in her network marketing company.

She's not at the very top rank.

Now she came to me because she really wanted to get to that top rank, and she knew she had a problem.

She told me that she could recruit and sell really, really well.

OK... so far that doesn't seem like a big problem.

Her team couldn't duplicate what she was doing.

You see, she was a trained nurse.

And she'd gone on to study and specialize in this one area that affects a huge percentage of the population.

She's really an expert in this field.

She gives workshops and she was writing a book on this.

And the product her network marketing company has really helps adjust and regulate this function in the body.

So she would go out and do her workshops as a trusted authority...

And of course, speaking with such knowledge on the topic.

At her workshops she would educate her audience on how the body functions and exactly what it needs to adjust and regulate.

Then she could show how her MLM product has exactly what they need to solve their problem.

She sells a ton of her MLM product.

And then turns around and converts those avid buyers into team members.

But of course, her team members don't have the years of study and expertise she does.

They can't speak from her position as a leader in the field.

So what can she do?

Now maybe you don't have a bunch of degrees or professional designations, and you're not even an author.

That still doesn't mean that what you're doing is going to work for most of your team.

So my advice to her, and to you, is the same.

Keep doing what's working for you.

Get yourself a system that IS duplicatable for your team.

If you don't have something to guide your team so they can build in a different way than you do...

You'll get stuck at some point.

You'll be pouring lots of new team members into the funnel...

But they'll be coming out the other end at the same rate.

They won't stick with it, because they can't see enough results fast enough.

Check out this system that virtually anyone can duplicate.

This will give you peace of mind and the ability to keep doing what's working for you...

While knowing that your team members have a rock solid, tried, tested and true system that they can use.

So don't fix what ain't broken!