Network Marketers: Are You Trying to Pull Rabbits Out of Your “Objection Handling Hat"​? - Gloria MacDonald 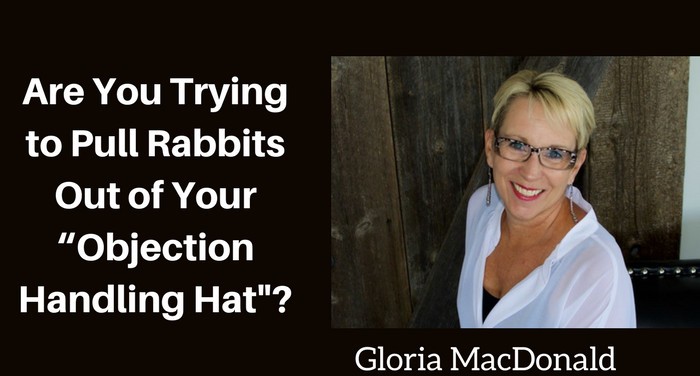 Network Marketers: Are You Trying to Pull Rabbits Out of Your “Objection Handling Hat”​?

I've heard about a very successful Network Marketing Leader (a 7-figure earner) who once gave a brilliant piece of advice.

Here's what he said…

You know, they don’t give you bigger trophies for making cold calls.

Point was that getting referrals and warm market prospecting (which is what the company focused on) is much easier to do.

And at the end of the day, you get paid and recognized for results, not methods.

But there’s even an easier way to do it with much less friction.

And that’s by going after your very best type of prospect.

And it’s the single most important thing you can learn IF you don’t want to fight an uphill battle… and instead recruit and build your downline with ease.

The very best prospect for your business is the guy or gal who already has an entrepreneurial mindset, wants to become ultra-successful and... this is a biggie... is already SOLD on network marketing.

Isn’t that a much better prospect to recruit, than someone who you need to convince that they should want to make more dough and why your opportunity is their ticket to freedom?

You can try pulling rabbits out of your “objection handling hat" all day long with people who need to be persuaded.

You can go after the low hanging fruit and have adult conversations with serious people who won't ridicule you, mutter stupid objections or waste your time.

The latter don’t walk around with a big stamp on their forehead that says... “I’m the entrepreneurial type”... or do they?

If you use the principles inside the this training, you won’t have to cold prospect ever again...

This is the big picture view of a proven system used by those who want to grow their business WITHOUT ADVERTISING, build large teams and make 6 and 7-Figures a year.

And YOU can too.

It’s not rocket science and it doesn’t take a very long time.

Ready to give it a shot?