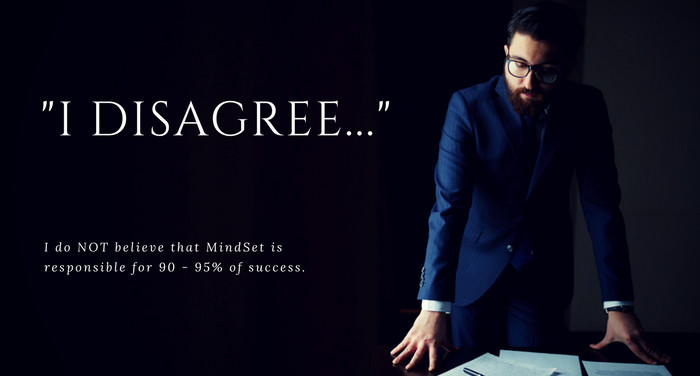 As I’m writing this, I’m on a plane on my way home from The Rise To Freedom Summit, a conference for network and affiliate marketers from all different companies.

I had the honor of speaking at the conference.

One of the things I said is…

Almost every speaker talked about mindset and how important it is to success.

Ray Higdon, who’s a big name in the network marketing training world, told a story about how his first level of success didn’t come until he repaired his relationship with his father.

If I remember correctly, Ray hadn’t spoken to his father for 13 years.

He knew what was going on mentally and emotionally was holding him back.

Tim Erway, who happens to be one of my mentors, said that mindset it probably 90 – 95 of success.

And that’s what I disagree with.

I don’t believe mindset is that important…

Now before I went on stage, I told Tim that I was going to disagree with him.

He said, “Really? About what?”

Here’s what I explained to him.

As I sat there throughout the weekend and listened to each speaker, and then had conversations with numerous people who were attending the summit…

I realized that not one of those speakers had risen to the level of success they had, because they had any skills, talents, or abilities that any other person in the room didn’t have…

Or that you can pay someone to do what you’re not good at.

I can hear you saying right now, “but I’m no good at ABC, or XYZ. And I sure as heck can’t afford to pay someone to do [fill in the blank] for me!!”

Where I just wasn’t sure where the funds were going to come from at the end of the month to pay the rent, electricity, or credit card bill.

More to give the world.

It’s always been in the toughest times that I found the most.

And what I know about you…

Is that you are brilliant beyond anything you could ever imagine.

There’s more power in you than you will ever tap into.

You have infinite potential.

And unlimited possibilities are at your fingertips.

Until you begin to accept this, and allow it into your being, even in a small way…

You will stay stuck in your fears.

Stuck in your limiting beliefs…

That you’re not as talented as, smart as, technical as, pretty as, young as, old as, experienced as, successful as…

But none of it is true!

You just haven’t discovered and accepted that…

You are Amazing, Genius and Divine.

In Celebration of Your Success!

P.S. Tim agreed with me!

P.P.S. In some circles these days, I’m seen as a bit of a rebel. And I’m ruffling some feathers with my bold statements about how powerful LinkedIn is compared to Facebook for building your business and growing your downline. I’m merely reporting facts and my experience.

P.P.P.S. If there’s any chance you’re seeing my posts and articles and you still haven’t seen my webinar “Discover The Untapped Power of LinkedIn” check it out here. It’s free.