The day Stephen Boyce threw a spitball at me... a life lesson for Network Marketers - Gloria MacDonald 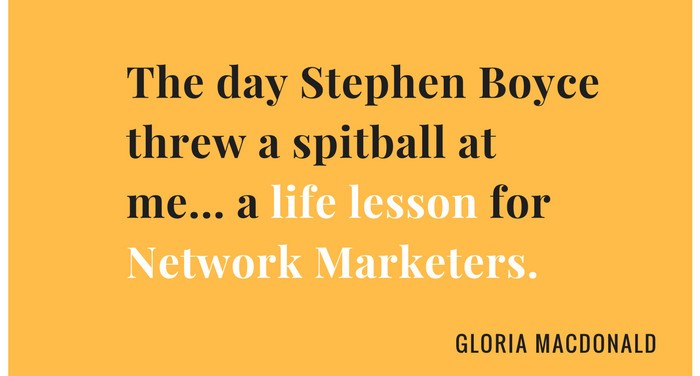 Have you ever had anything like that happen to you?

It was in 6th grade study hall.

This group of boys was sitting a couple of rows behind me in the auditorium.

And then it happened...

I felt it hit me.

Of course there was no physical pain.

But the emotional, psychological pain was excruciating.

I wanted to crawl under a rock and never come out again.

Of course to make matters ever worse...

In fact, the worst possible thing imaginable to a 6th grade girl...

I had a crush on Stephen Boyce.

So on top of everything else, I was heartbroken.

For the next couple of weeks on Tuesday, the day of the study hall, I was so upset that I was sick and literally couldn't go to school.

After a couple of times of being sick on Tuesdays, my wise mother clued in to something unusual going on.

And in her loving, caring, nurturing way, she helped bolster me up, and give me the courage to go back to school.

So what about you?

Have you ever had something like this happen to you in your business?

Maybe you were trying to "prospect up".

And you'd finally gotten your courage up to approach that person on your chicken list.

You know, the "professional" who's already making a good 6-figure income who you've been avoiding like the plague.

So you finally pick up that phone that weighs 5000 pounds.

Your palms are sweaty.

Your heart is pounding.

The phone is ringing...

And you blurt out something that you didn't mean to say. It wasn't in the script.

You just want to crawl back into bed and pull the covers over your head.

Maybe your prospect nicely brushes you off... or maybe not so nicely.

And maybe this little event followed an incident just a couple of weeks before where a family member threw a "proverbial" spit ball at you about your stupid pyramid scheme thing and embarrassed you in front of your whole family.

If you've been at this business for any amount of time, chances are you've had something like this happen to you.

Now here's the thing it took me YEARS to learn.

In fact, a way to build your business that completely eliminates ALL "spitballs".

And of course the rejection, frustration and discouragement that goes with it.

When you're using a system that attracts people TO you, you're only talking to people who are already interested in what you have to offer.

What a world of difference!

And what I've found is that this has enabled me to grow my business at least 10 times faster than ever before.

If you're ready to get rid of the "spitballs" for good here's how.